I can't believe it took half a month to be motivated to write an article. Anyway, like I said before, I'm writing an article about the blog structure. It's quite messy though.

The blog (kkiro.kr) uses a static blog generator - which uses React server side rendering (SSR) to render the page. It also uses JSON chunks to download only required information.

The generator is separated to multiple parts, mainly:

Sure, I could have made the blog using other static blog generators. But they're not fancy - I wanted to use React, single page app (SPA) and bunch of 'new' technologies because they're cool.

Or maybe I could've used blog platforms - Blogger, Tumblr, etc. But I don't want to use them, since they can't be modified easily, like implementing multilingual support.

So I searched for static blog generator that uses React, and there is only one blog generator: Gatsby. But it currently saves whole article data into single JS file. Which is very horrible for scaling. They're creating new version of Gatsby which builds JSON for each page, and uses GraphQL to generate metadata. They look cool, but it's not out yet. I'll reconsider using Gatsby once version 1.0 gets released.

Anyway, sure, GraphQL is cool, but I'm not quite ready for it now - I don't think it has matured enough.

The redux's metadata loader middleware automatically fetches the metadata and fills the data into right place using schema file from the metadata separator.

To allow server side rendering, it uses prefetching mechanism that utilizes react-router's structure.

There's nothing much to explain about it, since it's just a site made with React, react-router, redux.

The blog generator actually calls webpack to bundle the client code, though.

Metadata generator crawls the posts folder and generates posts metadata. Since we don't use GraphQL or something like that to process the data, the data is separated to actual post data and post lists, tag lists, etc... at the generation time.

To support Korean, I've added multilingual support too, so each list and post data is separated with languages.

So the generator generates this single JSON metadata file. This is used to build the whole site.

It doesn't look fancy - but this is done to create the JSON file for each page. After the generation is finished, It passes the data into the separator.

Metadata separator splits the metadata file into chunks of metadata information, and stores them into a dictionary with generated keys - eventually they become the filename.

Then it gets stored into metadata directory, ready to be read by the client. 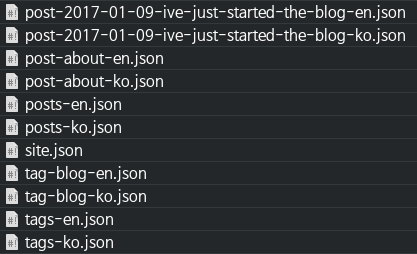 The separation is done using a schema file, which defines how the metadata should be splited.

At this stage, the site becomes renderable by the client, and the splited metadata files actually gets used on the development server, which supports dynamic preview of the page.

Anyway, the generator still has to render the pages and atom / RSS feed.

First, link renderer reads the metadata and generates the URLs that need to be renderered. Then, React renderer renders the actual pages into HTML.

It doesn't do anything special - it's just uses React's renderToStaticMarkup to render it. But I've been struggled to couple webpack and webpack-isomorphic-tools within the generator.

It uses prefetch routine to fetch the required data into redux state, which gets stored into HTML file too. I used JSON.stringify for this before, but since that could lead to serious XSS issue (it doesn't properly escape HTML), I changed it into serialize-javascript package.

It also uses react-helmet to construct header tags too.

After everything is done, it simply stores bunch of HTML pages.

RSS / Atom renderer renders the RSS / Atom feed of the blog. Actually, I could have skipped that, but since I use the feed reader often, I wanted to implement RSS / Atom feed for my blog too.

Originally I wanted to use React to generate XML too - but it's pretty meaningless and React doesn't support XML generation anyway. So I just decided to use pug template engine for this purpose.

Well, the pug template receives the metadata and renders the XML file. That's it. Nothing special. I had to make it call markdown renderer since it wants HTML, not markdown document.

After implementing multilingual support, the RSS / Atom feed had to render the XML for each languages. So I've changed them to filter the articles with selected language.

That's pretty all about my blog's structure. I had fun making it since I've never done static generation before. It turned out that I just had to use server side rendering like regular web server.

The code's pretty bad, though, but feel free to look around the source code: https://github.com/yoo2001818/kkiro.kr